The median house price in Ballarat started to edge upwards in the March Quarter 2017 according to figures released by the Real Estate Institute of Victoria.

Standout Suburbs Over The Last 12 Months 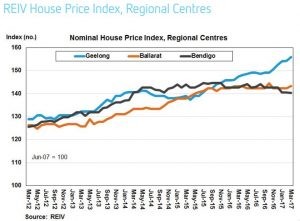 Melbourne’s median house price has recorded its strongest quarterly price growth since 2013 to smash the $800,000 barrier for the first time, new data from the REIV shows.

REIV President Joseph Walton said a range of factors had contributed to significant price growth across the city.

“Competition for homes, particularly in Melbourne’s inner and middle rings, has encouraged more vendors to take their home to market with multiple auction records falling this year.

While increases were recorded across the city, Melbourne’s middle suburbs were the main growth driver with the median house price increasing 6.1 per cent over the quarter to just over $960,000.

House prices in Templestowe in the north-east experienced the largest growth, up 17.6 per cent in the March quarter to a median of more than $1.5 million.

Meanwhile suburbs in Melbourne’s outer ring dominated the list of top growth suburbs this quarter with increases of more than 14.5 per cent recorded in Mount Eliza, Cranbourne North, Kilsyth and Mornington.

Mr Walton added price growth was also recorded at the top end of the market with house prices in inner Melbourne increasing 5.8 per cent to break the $1.5 million mark for the first time.

Solid price growth was also recorded in the apartment sector with the metropolitan Melbourne median up 3.8 per cent to $583,000.

“We’re not seeing any slowing in Melbourne’s property market with demand continuing to outstrip supply.”

Regional Victoria also performed strongly in the March quarter, with the median house price up 4.1 per cent to $377,000.