Regional Victoria experienced a fairly stable rental market for houses in July, as median rents remained flat at $290 per week. The vacancy rate in regional Victoria also remained stable at 2.4 per cent over the month, although median rents for units fell by 6.1 per cent, due to significant decreases in the Ballarat and Bendigo regions. On the other hand, vacant space in the Bendigo and Ballarat region tightened to 3.1 per cent and 2.7 per cent respectively over the July, while the vacancy rate in Geelong flattened at 3.2 per cent.

The vacancy rate in Melbourne was stable at 2.9 per cent in July 2015, while the median rent for houses also remained flat at $400 per week. The weekly median rent for units experienced an increase of 1.3 per cent to $395, from $390 in the previous month.

The rental market in the outer suburbs continues to remain the tightest in Melbourne, with the vacancy rate contracting further by 20 basis points to 2.0 per cent over July. Rents for both houses and units in the outer suburbs grew slightly by 0.3 per cent, bringing the median rent per week to $361 and $321 respectively. 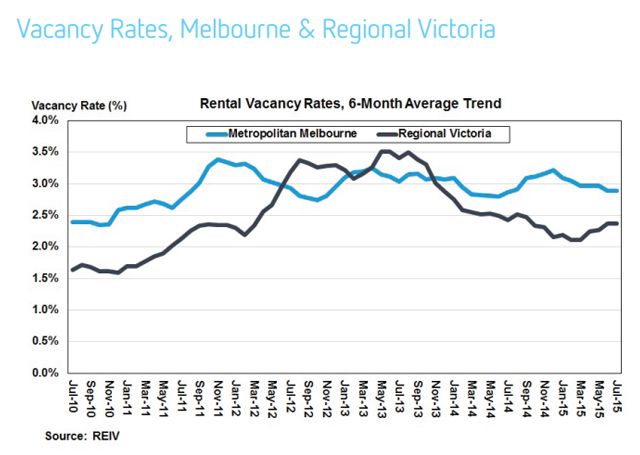