In April 2015, the vacancy rate in Regional Victoria increased to 2.2 per cent from 2.1 per cent in March 2015. Despite the increase, the rental market continues to remain tight in comparison to Metropolitan Melbourne and is 30 basis points lower than its value a year ago.

The vacancy rate in Geelong which recovered earlier this year, softened to 3.2 per cent – 80 basis points lower than its value a year ago. Vacant space in Bendigo and Ballarat tightened slightly to 2.9 per cent and 3.2 per cent respectively.

The vacancy rate for the rental market in Metropolitan Melbourne was at 3.0 per cent in April 2015, for the third consecutive month. As a result of increased vacant space, the median rents for both houses and units declined respectively by 1.3 per cent to $395 per week and 2.5 per cent to $390 per week.

Although median rents for units in all three Metropolitan regions experienced decreases over the month, median rents for houses in the inner Melbourne region rose significantly by 4.7 per cent in April. With the vacancy rate at 2.7 per cent, the inner metro region has experienced a tighter rental market so far this year, after an increase in supply led to higher vacancy rates in the latter half of 2014.

The outer metro rental market has been tighter in comparison to the other two major regions, although demand has slightly started to soften this year, with the vacancy rate up to 2.4 per cent from 2.2 per cent in the previous month. Median rents for houses in the outer region stabilised at $360 per week, while median rents for units declined by 1.6 per cent to $315 per week over the month. 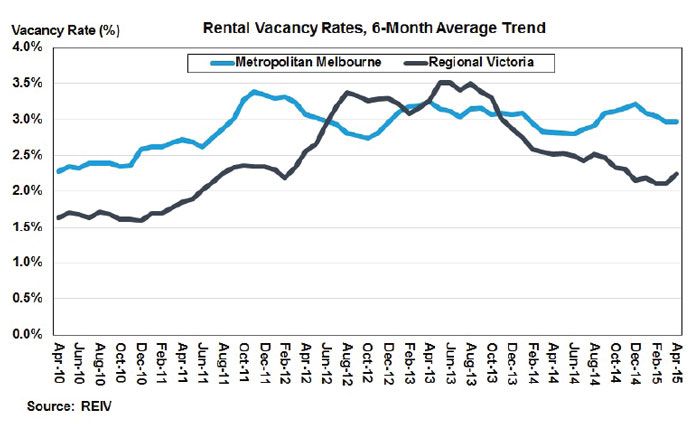