Vacancy Rate For Ballarat 2.6 % In February

Vacancy rates in Regional Victoria tightened to 2.1 per cent during the month of February 2015, from 2.2 previously. Of the three major regions, the vacancy rate for the Geelong region fell the most, to 3.2
per cent from 3.4 per cent for the same period and has been tightening for the past five months. The vacancy rate in the Geelong region is at its lowest level since April 2013. Vacancy rates in Bendigo and
Ballarat experienced declines as well, to 2.7 per cent and 2.6 per cent respectively.

Over February 2015, the vacancy rate in Melbourne tightened to 3.0 per cent from 3.1 per cent in the previous month. The median rent for both houses and units in Metropolitan Melbourne remained the same at
$400 and $395 respectively during the same period.

The middle suburbs experienced a flatter rental market over the month, with vacancy rates and rents for houses remaining stable over February 2015. Although the vacancy rate remained flat at 3.5 per cent, it is 0.5 percentage points higher than its value last year (3.0 per cent). 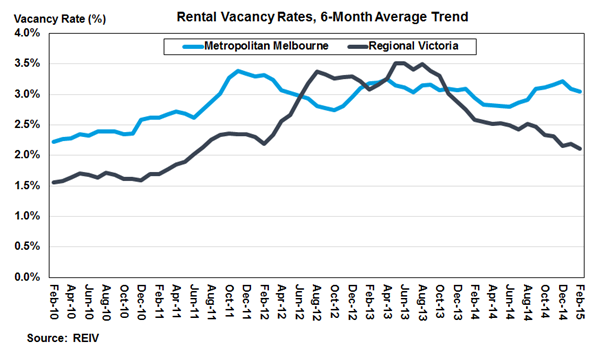