March Was a Thumping Month In Every Respect

It was a month of records.

We are extremely proud that we served more than 19,000 families and businesses to find a new home or investment property across Australia and New Zealand during the month, representing $8.74 billion in transaction value. This result is up a staggering 92 per cent year on year and 30 per cent higher than our previous best month in November 2020. 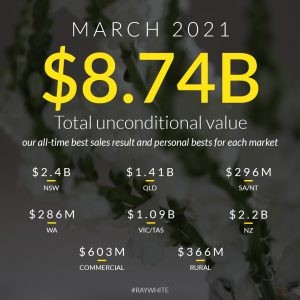 Record results were recorded in every market, including in Western Australia which saw $286 million in sales, beating our previous record set in 2007. Across Australia, we recorded $6.4 billion in total unconditional sales, up 90 per cent on the prior March. In New Zealand, we transacted $2.2 billion of property, up 99 per cent.

This was a result driven by more and more vendors seeking to take advantage of a strong market, coupled with the high speed and conviction in the decision making of buyers. The most powerful of combinations!

We brought on 10,760 new listings to the Australian and New Zealand real estate market in March, which was 16 per cent higher than in March 2020, and some 10 per cent more than in November 2020. Contrary to much market commentary, there is no shortage of new listings on the market. In fact, there is more new stock coming to market now than there has been for many years. As we look forward to April and May, we see continued strong listings numbers on the back of so many market appraisals currently being conducted.

Despite this increase in supply of new listings, buyer activity only strengthened during March. Auction clearance rates consistently held above 80 per cent, and agents reported strong private treaty sales with limited discounting. We sold 82 per cent of all auctions under the hammer, and we had active bidding on 91 per cent of all auctions. Our members met more buyers at open homes that they ever have before, with more than 152,000 check-ins at our opens during March, and our digital enquiries are also at record levels.

It is not surprising that more of our customers are choosing to use the auction method to sell their properties. Over the past two years, the percentage of properties that are sold by auction has climbed from 27 per cent to more than 35 per cent. We have always held the view that the auction method is the best way for us to create competition for our vendors and achieve a premium result in any market. The power of the auction method is only amplified in a market like we have now, with extreme price volatility and when we are averaging 5.3 registered bidders per auction.

We are seeing much better results for our vendor customers that are not selling prior to auction day, and instead running the full auction campaign. It is very common for vendors to achieve some strong offers before auction day, however our data shows that our clients achieved prices of almost 12 per cent more on average under the hammer than by accepting the highest offer prior.

The continued increase in house prices has made off-the-plan properties more attractive to purchasers. After a relatively quiet 2020, we have been experiencing a surge in interest in project sales which culminated in a strong sales month in March.

During March, we were delighted to be able to host over 130 of our top Australian performers and their partners at our annual Elite Conference at Byron Bay. Being the first large scale conference we have hosted since the start of the pandemic last year, and while we missed our New Zealand friends, it confirmed once again there is no substitute for the value and friendships that are created by being all together at such events. It was a fantastic event.

We were very excited to welcome Cameron Whitnall and six of his colleagues to Ray White Canberra during the month. Led by Ben Faulks and Scott Jackson, Ray White Canberra has now expanded to a total team of 75. “We now have both sides of Canberra firmly covered. Our origins were in Belconnen in the north but now our market share stretches across the whole capital and we are excited by what the future holds”, said Ben.

In our White Report of 12 months ago, we wrote about the uncertainty in the market at that time. We highlighted the importance of digital auctions “to create competition despite the obstacles we confronted” and that also that while there many voices highlighting the risks facing the property market, we wanted to ensure we “focussed on the basics and what we know works, and providing the best possible solutions to what remains an active marketplace”.

And so just like in March of last year we are in very unusual times, though at different ends of the market spectrum. Like last year, there is consensus among market commentators that these current conditions will continue for some time. And while we can’t remember experiencing more momentum in a real estate market, we remain focussed on ensuring that we take nothing for granted, and we do everything we can for our customers to generate the best possible result for them. Delivering great outcomes for our customers at a time of immense activity and very high expectations is a challenge all our members welcome.