Momentum continues to build across all Australasian property markets, as the collective efforts of our members delivered $6.1 billion in sales for February, up $2 billion or 49 per cent in February 2020. This is our best February result recorded, driven largely by a record result in NSW and very strong performances across all markets. 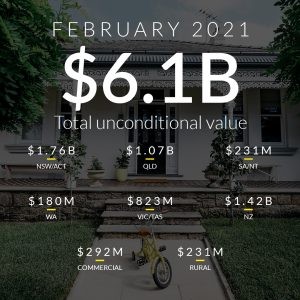 In Australia alone, we recorded $3.35 billion in total sales, up 42 per cent on the prior February. In New Zealand, we transacted $1.42 billion of property, up 84 per cent in 12 months. Every community is abuzz with stories of amazing local sales results. Many people seem to think that these results are caused by a lack of stock available for sale. This is not the case. It is true that the total number of listings on the market across Australia and New Zealand is down 13 per cent on last year and 32 per cent on two years ago. But total listings aren’t that relevant as they include all kinds of old stock. A more relevant question is: how many properties came to market in the past month?

In Australia, in February we listed 5,977 properties which was nearly 10 per cent more than we listed in February 2020 and 15 per cent more than 2019. We sold 4,819 properties in the month. So we are listing more property than we have for the past two years, and listing more than we are selling. And there are some early signs in March that listing numbers are continuing to rise. In New Zealand, we listed 1,942 properties, which was marginally down from last year, and sold 1,878.

So these record sales results are driven by record levels of buyer interest that is fast outpacing increasing levels of stock: Did you know that on average we will have 7 registered bidders at a Ray White auction, 2.5 more than we had a year ago? We have never seen national auction clearance rates so high at 83 per cent, with active bidding on 93 per cent of all auctions. Our members met more buyers at open homes that they ever have before, with more than 155,000 check-ins at our opens during February.

However, the most important message that we can communicate to our clients this month is the value that is being created by our members by taking properties all the way through to auction day rather than selling before auction. In a month in which 43 per cent of all our sales we made via the auction method, our data shows that our clients achieved prices 12 per cent more on average under the hammer than by accepting the highest offer prior. What an incredible statistic! The sale of 31 Reina St, North Bondi by Warren Ginsberg and Elliott Placks of Ray White Double Bay for $6.1 million is a stunning example of this point. The vendors achieved a result that was 22 per cent higher than the best pre-auction offer and one that they would have accepted if not for the strong advice of Warren and Elliott to take it to auction day.

The March edition of Ray White Now will soon be released. As the largest real estate group in Australasia, and one in which all members use the same technology systems to collect data, and all backed up by a team of data scientists and engineers, we are able to produce a report that generates real-time insights into the key metrics that underpin current activity. Our Now publications have been viewed more than 500,000 times and our real time data insights even more valuable in 2021 and beyond as we don’t claim to know what the future holds, but can we inform you on all the details of what is happening now and the conditions you can expect in an upcoming sales campaign. Congratulations to David Walker and Greg Windel for expanding their high-performing group in Sydney’s Upper North Shore to open in Roseville during the month with Jessica Cao, Lisa Davies and Scott Phillips (pictured) leading the sales team in the new office.

On top of incredible results for February which included $2.46 billion in lodgements, the Loan Market group has welcomed three broker aggregation businesses Choice Aggregation Services, FAST and PLAN Australia to its growing network. The purchase of the three networks from NAB makes Loan Market now the largest privately-owned aggregator in Australia, with more than 5000 mortgage brokers. The insights from Loan Market have never been more crucial in cementing our confidence in the underlying strength and direction of our real estate markets.

March Was a Thumping Month In Every Respect

Back to all news
Up to Date