Residential Vacancy Rate Stable In May

Over May 2015, the vacancy rate in regional Victoria increased to 2.3 per cent and has been increasing steadily since the beginning of the year. During the same period, rents have remained stable at $290 per week for houses, while declining significantly by 4.0 per cent to $240 per week for units.

The vacancy rate in metro Melbourne remained at 3.0 per cent over May 2015 for the fourth consecutive month, given current availability of rental stock. Although vacant space is higher than it was a year ago, the median rent for houses has continued to grow – up 1.3 per cent for May and 2.5 per cent since last year to $400 per week. On the other hand, growth in leases for units has been relatively flat at $390 per week.

Vacant space in Melbourne’s inner suburbs increased to 2.8 per cent in May 2015 from 2.7 per cent in April. Consequently, the median rent for both houses and units decreased by 4.5 per cent and 2.4 per cent respectively. The rental market in the middle suburbs tightened over May to 3.5 per cent, recovering from vacancy rates trending upwards over the past twelve months. As such, median rents increased by 3.8 per cent to $395 per week for houses and 1.4 per cent to $365 per week for units over this period. Three bedroom units in the middle metro region was the highest contributor for overall rental growth, up 4.5 per cent for the month.

The outer Melbourne rental market which has remained the tightest of the three major metro regions experienced a contraction in vacancy rates to 2.2 per cent from 2.4 per cent over May 2015. However, the median rent for houses in the outer suburbs decreased by 2.4 per cent to $351 per week, given that lower interest rates have increased the incentive to purchase houses in the more affordable outer suburbs. This is only a short term effect, as the resulting increase in price growth should in turn favour the demand for rental properties in the medium term. On the other hand, the median rent in the outer suburbs grew by
1.6 per cent to $320 per week in May. 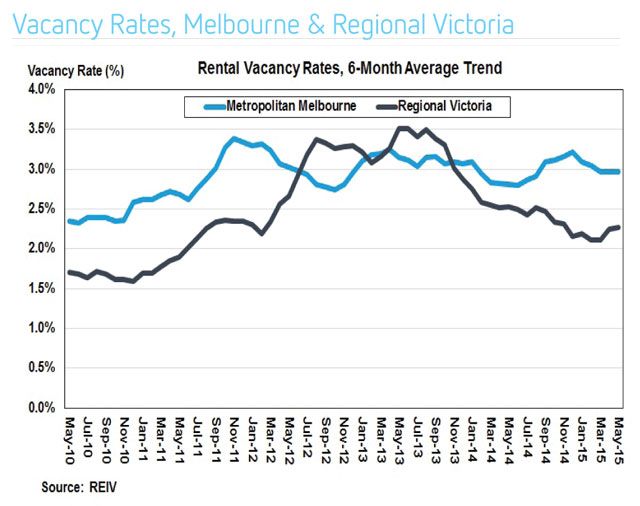