What to make of another month of mixed signals and activity?

There were lots of very positive signs. Sales volumes up for the second month in a row, all our auction metrics strengthening further, and average days on market great 12 months lows. Loan Market also had a record month of lodgements.

We sold $3.68 billion in property, just a bit up on the year before. But the big markets of NSW and ACT and Victoria, we were up 12 per cent. Remember that these were the markets that suffered the most during 2018. Our network in Western Australia booked $111 million worth of unconditional sales in August, which was a 26.2 per cent jump on August 2018. 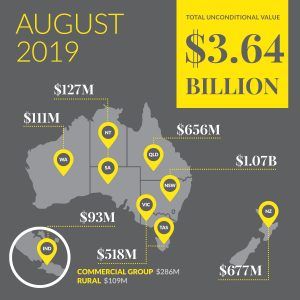 Many of our members have experienced really tough conditions over the past 12 months. So many moments of truth, as they battled to provide their customers with great results in an uncertain and cautious market. It is so fantastic then for their hard work and resilience to be rewarded with better conditions and outcomes for their teams and their customers.

But have a look at the following two slides. Firstly, overall listing numbers for the group are well down on the prior year.

And then this chart show auction numbers over the past 12 months. 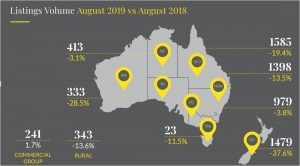 Notice how in September 2018 our auction numbers lifted 25% on August as is expected with the arrival of spring. However no such lift in 2019.

So it would be very presumptuous to expect that the sales growth momentum of recent months will continue into September. There is lots of talk that October auction numbers are looking promising.

Our auctions listings are now sitting at 23.2 per cent in Australia, a four per cent increase over last August. What’s interesting is that the market had 24 per cent less scheduled auctions in Australia while we did more.

The top gainer for us for auctions is South Australia, with 8.4 per cent taking their share to 36.1 per cent in the state. Our South Australian network has just appointed its first ever Chief Auctioneer in John Morris. He is charged with increasing our auction market share so we are expecting more good things to come.

This month we hit a two year run in market share growth as a group in Australia and New Zealand to currently be 11.55 per cent, which is an all-time high. So as a group, the adage that we sail best in light winds has been proven to be true once again. This has been our greatest continued group market share run since the GFC.

This month we wrapped up the Ignite 2019 training series in Perth. Across five cities, we had a turnout of more than 2000 members and we heard from  a truly world class speaker in Gus Balbontin, the former CTO of Lonely Planet . His message was clear – always strive for improvement, no matter how successful you may be.

Congratulations to our network in WA for once again taking out the top gong at their REIWA awards. In the blue ribbon category, top agent in WA Vivien Yap was once again named by REIWA as running the Top Team by Value Sold for 2019. Andrew Huggins of Ray White Urban Springs took home the Top Salesperson by Auction Listings Sold award for the third year in a row with his office also winning the Top Office by Auction Listings Sold for the first time. 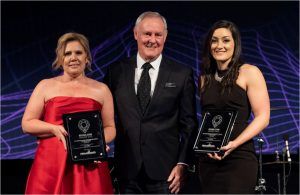 It’s been wonderful to see everyone out for their respective awards season night of nights in Melbourne, Perth ,Brisbane, Sydney and New Zealand as well as our Commercial awards. Next up the Rural Muster will be held on the Gold Coast to celebrate our rural members and their successes.

In an exciting step for Ray White Queensland, two of the network’s best regarded and top business owners are expanding from their established markets in New Farm and Spring Hill across the Brisbane River. Ray White New Farm owners Matt Lancashire and Haesley Cush, together with two of their top agents from New Farm, Scott Darwon and Brandon Wortley, will now trade as Ray White Bulimba to service the vibrant inner city riverside community.

Welcome to Emma Hawker and her team in opening Ray White Rural Tamborine Mountain. Having operated independently for almost two years, she’s looking forward to having the support of such a recognisable brand. Welcome to the family.

Our broker network had their largest month ever for applications with $1.52 billion, and $900 million approvals and $765 million in approvals. Great to see the appetite for lending has improved in light of all the recent rate cuts plus the prudential regulator’s changes.

We maintain our relentless pursuit for customer satisfaction and our network sent 8083 survey in August, up from 9165 surveys in July. We received a response rate of 35 per cent and our NPS score sits at a very high 81.