As our community dealt with lockdowns in Victoria and New Zealand, and heard strong opinions from many that New South Wales should follow suit, the real estate market in Australia and New Zealand continued to march on in August. As has been the case for six months now, buyers continued to tune out to commentators that predicted their retreat. Buyers remained more committed than ever despite obstacles being thrown in their way, and our vendors that decided to enter the market now were well rewarded. 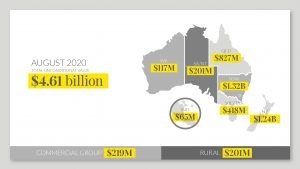 We sold $4.61 billion of property during August, our highest ever August result. This is an increase of 25 per cent on the same month last year. That, is despite our Victorian results being 23.4 per cent down, as inspections were banned for most of the month in Melbourne. A company personal best might have been on the cards if not for the Melbourne results – incredible to think what might have occurred in a month that historically is pretty lacklustre, as many vendors wait for the promise of spring.

Another company record in New Zealand, beating the record set just last month, with $1.24 billion in sales. Staggering results right across the North and South Islands. New South Wales once again produced a result more akin to the busy months of March or November, with $1.32 billion in sales. Queensland recorded a 19.4 per cent increase to write $827 million in sales, and South Australia also recorded a company record at $201 million. Western Australia recorded sales consistent with last year, though this was caused by a reduction in stock available for sale following strong selling months.

Auction statistics are always a great tell tale for the underlying health of the market. In August, our key metrics of number of scheduled auctions (increase of 21.6 per cent), number of registered bidders (increase of 0.3 per cent to 4.6 per auction) and auction day clearance rates (61.8 per cent), further endorse the strength of our sales results and give us confidence that our sales momentum is set to continue through spring.

The release of the financial results for the Australian banks for the 2020 financial year included commentary that is very relevant to all Australian property owners. All banks spoke at length about the size and extent of mortgage deferrals, highlighting the very large numbers of its customers that are not up to date with their mortgages, and that while loan deferrals will be extended, on a case-by-case basis to March 2021, the message was writ large: “the property market is holding up well, you may want to make the decision to sell and put yourself on a stronger footing”.

Our Loan Market colleagues have booked a stunning month of results as well, with $1.76 billion lodgements, some $1.26 billion in approvals and $1.03 billion in settlements. As we have been saying since March, the insights from Loan Market has given us confidence in the strength of the banking system and the availability of credit on great terms to buyers, underpinning the health of the property market. Loan Market brokers are also seeing big differences in turnaround times from the various lenders. Some major lenders are taking up to 20 days for a decision while others are at one day turnarounds. As always, we recommend buyers seek advice from a broker to make sure they are getting the best deal and turnaround times for their situation.

It was wonderful to celebrate with so many of our members at eight digital awards ceremonies in August and early September, celebrating some extraordinary achievements in extraordinary times. Over 5600 joined us online as we recognised 1548 individuals and offices from administrators, property managers, sales agents and business owners – we are very proud of each and every one of our members.

It is very hard to remember a time in our 118 year history when the current market activity contrasts more sharply with the outlook painted by major banks and economists. We remain as a player in the market and not a speculator on its future, and our message remains that there is a huge amount of activity going on right now in the Australian real estate market, and we can be confident that it will continue for the balance of 2020. As the Australian banks agree, no one can be certain what awaits us next year.