What a financial year that was! We started it with a fair degree of concern, being pounded by headlines predicting we would have a shocker. It would have been easy for us to lose our nerve and find excuses, just when our customers needed us to work hard and provide a cool head and offer thoughtful advice.

But by any metric it was a great year for the company. Sure, we traded less real estate, but we did nearly $41 billlion in sales, down only seven per cent on the prior year. The number of members who reached Elite and Chairman’s Elite sales was 279 in total, down only by six members overall and still very impressive. Our NPS was up strongly at 81 and property management figures were higher too. Our market share has never been stronger, growing to 11.55 per cent.

This has been our greatest continued group market share growth since the GFC. Standouts at zone level were Western Australia (+1.9%), New Zealand (+1.2%) and NSW Blue (0.8%).

These results were testament to the resilience and perseverance our our members. We could not have been prouder with the effort of our members to deliver for our customers in these more difficult markets. We now wipe the slate clean for the new financial year! Success isn’t guaranteed from our past scorecards. It doesn’t give us the right to make fewer phone calls, or do less for our customers. All we have is earned is the right to go again. 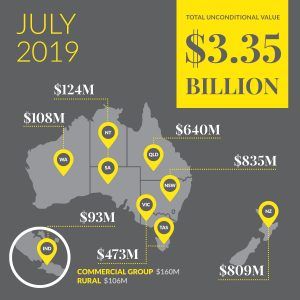 In July 2019, we recorded $3.35 billion in total unconditional sales for our network which included $835 million for our NSW network, and $809 million in New Zealand too. Most importantly, this is the first time since May 2018 that we have written more sales commission that in the corresponding month in the prior year!

Increased buyer demand is reflected in the results of our 1331 auction campaigns have been richly rewarded particularly in many parts of Sydney, Melbourne and south-east Queensland from the reports emerging of competitive bidding and big results over reserves.

Registered bidders was higher at 3.4 people per property, compared to 3.1 in June. But the big news story is in the clearance rate. Melbourne agents cleared 71.3 per cent in July, up from 62 per cent in June, while in Sydney a whopping 72 per cent sold under the hammer, compared to 59 per cent in the prior month. Listing numbers though continue to remain stubborn. In the larger markets of Sydney and Melbourne, listings are down nearly 10% on last year. Queensland, SA and WA are more consistent with the proper year. At the end of July we hosted our fifth Leadership Academy in Sydney where in our effort to provide a world-class education for our members by offering a global perspective on leadership skills and best practice. We hosted nearly 300 Ray White members and clients over 3 days. The workshops are led by professor Boris Groysberg from Harvard Business School in Boston. We believe we have a key duty to encourage our business owners to understand the skills of leadership and be relentless at trying to improve and get better.

In his fifth trip tour to Sydney with Ray White, Professor Boris Groysberg called the Whites “a learning family”. “Out of all the different families I know, the Whites are one of a few business families that spends by far a lot of time on learning and development,” Prof Groysberg said. “Ray White is a learning organisation and the Whites are a learning family. People probably don’t realise that Ray White is actually a very complicated business. It’s gone through a tremendous transformation but one of the things that amazes me over the years is – even though they do have a leading position – they are not complacent. Ray White is always trying to stay ahead of things. I am privileged to be here and I come back each year as it’s a two-way street and I have learned a lot about franchising from Ray White.” Commercial NSW – Western Sydney: One of the most successful commercial real estate agents has taken charge of Ray White Commercial NSW – Western Sydney with aspirations of expansion and market domination. Peter Vines, who has 15 years of experience behind him in both Australia and Europe, saw a real opportunity to capitalise on the chance afforded to him. “The western suburbs are the epicentre of Sydney with a lot of money being poured into infrastructure out there… the growth opportunities for a commercial business are just enormous,” Mr Vines said.

Dandenong: Directors Sami Karakas and Ben Jusufi have recently re-branding their business to become Ray White Dandenong. With a combined 27 years of experience between them, the pair have worked in Dandenong since the beginning of their real estate careers. They have both formed strong relationships with their local community and believe their move to Ray White was the natural step in reaching that next level of growth.

Kellyville: Welcome to Sue Tam and her brother Jin Choong in Sydney who have re-branded their business to become Ray White Kellyville. With a combined 35 years of real estate experience, both Ms Tam and Mr Choong have worked in the north-west of Sydney since the beginning of their real estate careers. Both have formed strong relationships with their local community and believe the move to Ray White was the natural step in reaching that next level of growth.

Berwick: Debbie Brettoner and Matt Doyle, two of the highest performing agents in Melbourne’s south-east, have made the move to Ray White and will be joining Eric Zhang as directors of Ray White Berwick. With a combined eight years experience in the real estate industry, this mother and son duo believe their move to Ray White was the natural step in reaching that next level of growth.

Beenleigh: Building on the success of Ray White Marsden which only opened 18 months ago, business owner Avi Khan is expanding into nearby Beenleigh. Along with new business partners and joint owners Glenn Hamilton and Bec Cragg, the new team are aiming to replicate the rapid growth and success they’re experiencing in Marsden.

Armidale: Ray White Rural Guyra | Armidale owners Andrew and Dayna Starr have expanding their business and branched into the residential space with a new Ray White office in Armidale. With over 20 years experience in the real estate industry, Mr Starr believes this is a great opportunity to not only expand his reach across northern NSW but also provide greater exposure to his clients and local community. Mr Starr’s business will be a full service real estate office covering everything from large scale farms and rural lifestyle properties to residential sales and property management. 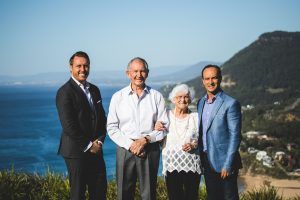 Ken McCarthy, at age 89, he’s our oldest member and still going strong at his family business in Helensburgh. The sprightly Ken McCarthy is a proud member of another fourth generation family owned business in ray White Helensburgh – which is owned by his grandsons Mattias Samuelsson and Simon Beaufils. Mr McCarthy has been in real estate for 40 years and he is still collecting Continuing Professional Development points and he strives to keep learning at 89 years young. His says his secret to living a long and productive life is a daily swim and a sneaky scotch every night. Just one drink though.

We maintain our relentless pursuit for customer satisfaction and our network sent 9165 survey in July, up from 8896 surveys in June. We received a response rate from 36% and our NPS score sits at a very high 80.