May 2019 will likely go down in history as a pivotal moment in our immediate history.

The Coalition won the Federal Election, APRA signalled to lenders to relax the stress test on a borrower’s capacity and then we saw the first cut to interest rates in almost three years. The official cash rate was dropped to 1.25 per cent by the Reserve Bank of Australia, which essentially provided a shot in the arm to the property market. We’d already seen a noticeable change in the atmosphere in the last few weeks with increased inspection numbers and people more willing to raise their hand at auctions again.

Overall May’s count suggest Ray White listings remain low for most capital cities, with the month still largely a buyers’ market however we’re also now starting to see early signs of more listing activity. The federal decisions appears to have given more confidence to buyers to enter the market knowing that key downside risks have been mitigated. Perhaps it’ll now be perceived that the risk of not acting in today’s market outweighs the risk of getting into or upgrading in this market. There seems to be a real confidence with our principals over the last few weeks post the election, but it will be interesting to see if this can be sustained.

With many offices continuing to identify lack of stock as their biggest issue, we are hopeful the resolution of the election uncertainty will give vendors more confidence to come back to market. 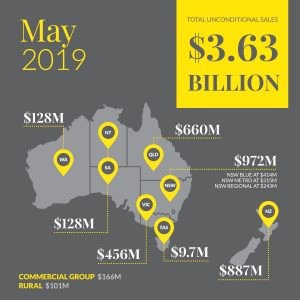 Looking back on May our members sold $3.66 billion worth of property across Australia and New Zealand, which was down 15 per cent year on year. The good news is that it appears the easing in Melbourne may have slowed somewhat. Our CEO in Victoria Stephen Dullens reflected that “it was a month of two halves.

“I am hoping that sentiment has shifted given our clearance rate is up and buyers are out in force at auctions and inspections. Our regional markets are very strong, particularly in Ballarat, Albury Wodonga and Geelong while parts of inner city Melbourne appear to have moved into recovery.

We are running 20-30 per cent of all of the auctions in Victoria which is terrific considering our market share is eight per cent.

Speaking of auctions, we had a solid month across the group with some 1295 auctions conducted, slightly higher than April. There was however a big jump in the number of people attending our auctions to 47,200 across Australia and New Zealand. The average bidder number rose to 2.8 people per auction and our Victorian members were the standout network this month as they cleared 62 per cent of their auctions, with 431 scheduled.

The top auction sale of the month was down in Gerringong, where Neil Campbell teamed up with Craig Pontey to sell the prized block of land at 242 Fern St, Gerringong – which was owned by chicken heir Robby Ingham – for $11.3M. And the auction with the most activity was in Adelaide, where Jordan Ekers experimented with a no-reserve auction which drew out 27 registered bidders from all over Australia, seeing the tidy three bedroom brick home at 3/5 L’estrange St, Glenside sell for $607,500 amid spirited bidding. I would have to say there’s no more important issue at the heart of the Ray White Group than the importance of family business. Some 80 Ray White business owners, many with their families, attended the second Ray White Succession & Family Business Forum on the Gold Coast, facilitated by Carey Smith, Ray White New Zealand CEO and Luke Richardson, Head of Profit. We know succession planning is like a relay race and that some people make their first big move early and some people drop the baton. Regardless, there is no finish line in our business. We are blessed with the scale to provide expertise and skills to help our owners with all business scenarios, we’ve seen them all and are only too happy to help. If anything, I just want to stress that the earlier you have talks with your family the better so everyone knows where they stand.

Naturally the future of the company and our brand is underpinned by the success of the people who work under it. During the month it was announced that our top performer Gavin Rubinstein is opening his own business in Woollahra. Mr Rubinstein has been part of the leading Ray White Double Bay office for the past nine years and we look forward to the continued success of his whole team is his own business. 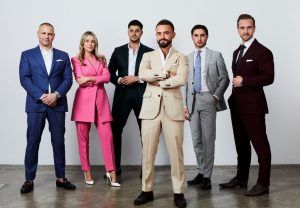 Our leading agency Ray White Double Bay commenced its next phase of expansion with the recruitment of young gun Alan Fettes who brings with him more than five years experience in selling real estate in Sydney’s blue chip eastern suburbs.

We also welcomed Jamie Van Le, who joined the newly opened Ray White Mascot team. He’s maintained one of the strongest market shares in the area particularly over the past few years, and decided to join the new Ray White business which is owned by William Ho.

In New Zealand, we welcomed Mark Rumsey to the family as the new business owner, principal and licensed agent for Ray White Nelson, Richmond and Motueka in the beautiful Upper South Island. A business owner for the last decade, Mr Rumsey said he was excited about his next chapter, heading up not one but three Ray White businesses in the lush region facing Tasman Bay.

In WA, experienced real estate agent Leah Quince has just opened her own Ray White office in the gold mining town of Kalgoorlie in Western Australia. Leah Quince has sold and managed many properties throughout Kalgoorlie Boulder over the past 12 years and more recently with the Ray White Kambalda office. Opening her own business seemed like the obvious next step in her real estate career.

And it’s great to see Deborah Brady and Jody Fewster in Cottesloe | Mosman Park recruit Chris Story to their team.

In Brisbane, high-performing husband and wife duo, Rudy and Alma Grommen, have now opened their new Ray White business in Augustine Heights, in the rapidly growing Greater Springfield region. The pair have since closed their Goodna office but have retained their business in nearby Redbank Plains.

In Melbourne, it was great to see Callum MacPherson join the Ray White Frankston team. Mr MacPherson has always had a passion for property since childhood, having in fact bought his first investment property in country Victoria at the tender age of 13 years old for $6000. “Buying my first home at such a young age made me realise that this was my passion,” he said.

Our broker cousins at Loan Market had a solid month with $1.17 billion in applications, $791 million in approvals and $747 million in settlements with good things to come no doubt. 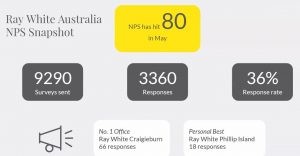 We were delighted to see our group’s NPS hit 80 in May, with a special shout out to the Ray White Craigieburn team who had more than 66 responses and was the number one office for May. And hats off to the team at Phillip Island who has a PB in terms of the number of survey responses received back for the month of May at 18.

Until next month, I’m Dan White